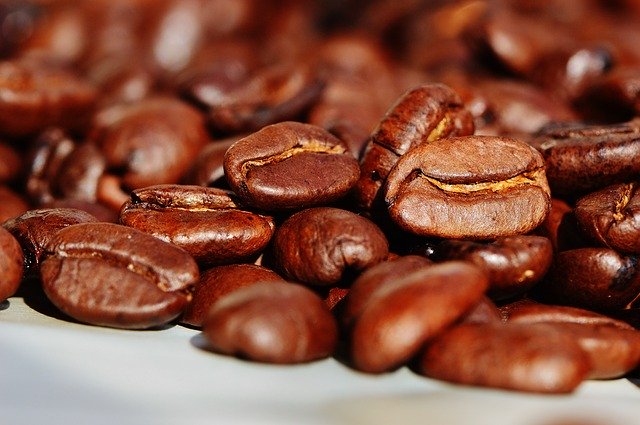 The guttural-sounding whoosh of flame meeting gas interrupts the hypnotic rumbling of the rotating drum, as all 44 burners simultaneously fire up and provide heat to the roasting chamber. The roaster needs to heat up and stabilize before the raw, green coffee beans – sourced from misty hills in remote regions of the tropics – are added, and begin their transformation from small green seeds to plump roasted beans.

The preheat cycle lasts just long enough to perform the morning ritual of brewing a cup. As the roasting room grows warmer and the mind-numbing rumble of the turning drum continues, water is put on to boil, and a handful of beans from the previous day’s roasts are weighed out and ground. As bean meets burr, the comforting, exotic aroma of fresh ground coffee emanates to fill the air. Soon the aroma will be displayed in the cup, as hot water is carefully poured over the grounds, extracting the thousands of flavor compounds found in the humble coffee bean. Jute bags adorned with coffee-centric images and the names of faraway co-ops crowd the bean warehouse. Each bulbous bag contains the result of hard labor and dedication. In the bag, the green beans are momentarily useless. It’s the roasting process that brings these beans to life.

While green, all of the beans look and smell much the same, even though they aren’t. There are subtle differences – shades of green, ranging from almost blue to greenish yellow. And, though they all smell similar to fresh grass or hay, there are subtle differences in their scent. Some hint at an animal-like muskiness, while some smell foresty and sweet. These differences are characteristic of each bean’s origin and varietal, and they will soon become more apparent as the enzymatic reactions spurred by the roasting process change the chemical and physical makeup of each bean.

But, for now, as the roaster continues to heat up, they will be scooped two-and-a-half pounds at a time into a bucket where they will wait until the moment they are dumped into the hopper and then dropped into the preheated steel drum.

Up overhead goes the 20 or so pound bucket of beans. It sounds, as they are dumped into the metal hopper, like a sudden downpour hitting a tin roof. The shrill cry of metal on metal briefly fills the air as the lever is pulled to open the door between the hopper and drum, but it immediately is replaced by the rhythmic swooshing of the coffee against the wall of the steel drum. The temperature falls as the coffee enters the drum, but soon it will equalize and begin a steady climb.

As the beans tumble in the roaster, the trier will be pulled out to check the progress and revealing beans that have browned, grown in size, and lost moisture. As the roasting process continues, the beans grown deeper brown as the sugars caramelize and various chemical reactions develop the flavor and aroma of these seeds from a foreign land.

The aroma emerging from the roaster is at first bread-like, but as the beans develop and begin to pop, it grows stronger and sweeter, at times revealing itself as flowers or tropical fruit.

A few more minutes pass as the trier is repeatedly pulled to check the progress of the roast. In these final minutes the roast is constantly changing. There is a small window – a sweet spot if you will – where a coffee bean will display its best characteristics. Once this sweet spot is reached the roast is quickly stopped.

The weighty arm that holds the drum door closed during roasting is pulled back, releasing sweet smoke and thousands of plump, perfectly roasted beans. As the beans hit the cooling tray the effects of the roast can be seen, smelled and heard. As the smoke clears and the sizzle and pop of the beans cease, they quickly cool. Maybe one or two are tasted as they are still warm to the touch.

The drum door is shut. Whoosh, the flame fires up. The bucket is filled, raised overhead and dumped into the hopper. The hopper door opens and lets the next batch of beans begin the process of being brought to life. The smell of freshly roasted coffee permeates the room. The swoosh of the beans is constant. It’s getting hot…the day’s roasting continues.